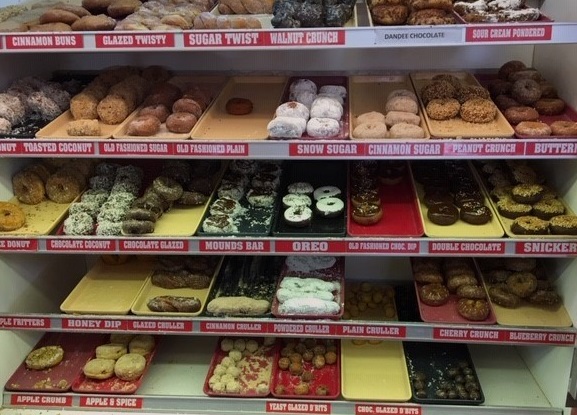 I heard about this terrific little place in Pompano Beach, Florida called Dandee Donut Factory. On the way to the ocean, I decided to stop and give their donuts a try. I’m glad I did, their donuts were more like desserts than dunking cakes. I left with two dozen and shared my good fortune with others. They have a few other locations throughout Florida and Massachusetts. I was happy to hear that one will be coming to my neighborhood.

Sandwiches and cheeseburgers were on the menu with amazing coffee combinations. The side of pasta salad included in my lunch order was fantastic! They did a nice job on the tuna salad, all white tuna without too much chopped celery to water down the taste. The donuts were pastry-like and super fresh. The “Mounds Bar” donut was ensconced in fresh shredded coconut and splashed with dark chocolate ganache. The Boston cream donut was filled throughout with creamy custard. Their donuts did not make your taste buds stop short due to a preservative taste. They are made on the premises daily.

The greatest part of the experience was the laid-back demeanor of the employees and neighborhood regulars. It was a little like the Andy Griffith show I watched re-runs of as a kid.

I snapped some pictures and said goodbye. On the road toward the beach, I saw an old-style Barber Shop just like the meeting place for characters in the show. I imagined the customers from Dandee Donut Factory gathering there before lunch.

A man was asking drivers who stopped at the light for some money. He held a very interesting sign that had me in stitches. I had to give him a little money for the laughs. His sign read, “Need Money for DNA Test – Girlfriend Might be Sister.” It was a refreshing change from the sacrilegious signs saying “Give me money – God Bless you”.

As for the beach it was covered in seaweed but the ocean was as beautiful as ever. I taped a little beach music for morning meditation. I had donuts for breakfast a couple of times and I felt fine…