We all went over to my friend’s house, she has the full baker’s kitchen, large and heavily equipped. We decided to make fun and easy recipes, caramel apples, and meringue cookies. We got out the slow cooker and began heating the caramel for dipping apples and 15 minutes later measured out the egg whites for the cookies. The egg whites needed to sit for half an hour before making the meringue.

Then the cat happened. What I mean to say is that the neighbor’s cat was locked out of the house, apparently without her knowledge when she went off on a cruise. The poor thing must have been wandering around her backyard for days and no one knew until she made her presence known. She was scrawny, dirty and hungry. We were distraught and of course, began tending to her, and forgot about the caramel.

After we set her into a cozy space with food and water (my friend’s den was the perfect place to keep her safe from her own irate cat) we remembered the caramel. Unfortunately the overheating separated the caramel oils and so it kept sliding off of the apples. My friends could not stop laughing. I just stepped away in a quandary totally confused about what to do with this. Most bakers you see are absolutely amazing, we are the direct opposite, the other end of the spectrum if you will. 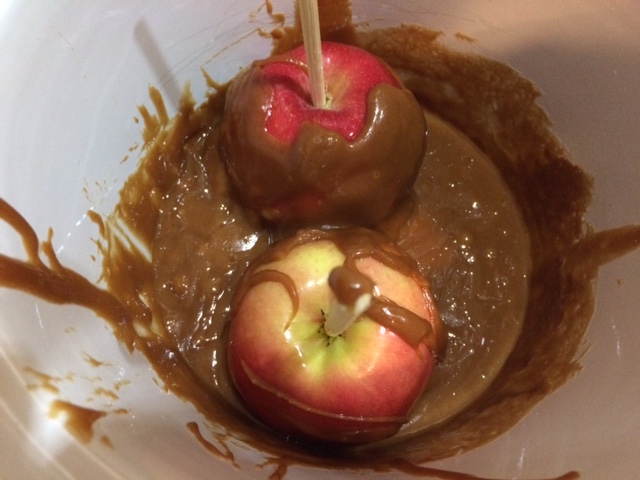 After the caramel cooled down a bit, I decided to put on some disposable baking gloves. I went to work covering and smoothing the caramel over the apples by hand. I finally got them covered. In the meantime, my friends just kept laughing. I thought “Oh why not, I’m going to blog about this, it’s just the way it goes during most of our baking sessions.

We gave up and decided to clean out that poor slow cooker when suddenly, we realized that we had left the egg whites out too long. My friend said, “Don’t worry, it will be fine”. We added the other ingredients and began the blending. It was an arduous process because the egg whites did not stiffen very easily or well. But after a time the sugar melted and the process of baking them began.

I have to say, they did not come out like the picture in the “Taste of Home” cookbook we took the recipe from, but they did taste good and believe it or not so did the caramel apples. We decided to keep these treats for ourselves because although tasty, not something just anyone would eat.  Yes, I know it’s all a bit wacky… 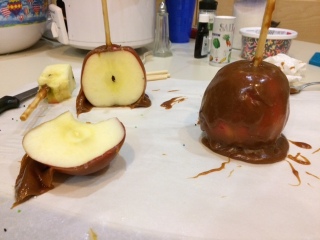 One thing is for sure, it was fun. We are going to try again as we have decided that practice makes perfect, but unfortunately, time is a serious issue for our efforts but we will be patient and do what we can when we can.

I recommend “Taste of Home” for people like us, because it also contains really fun “no bake” recipes for wonderful holiday treats. Unfortunately, my attempt at limiting the consumption of baked goods during the holidays. it is waning fast so I am doubling up on exercise. Oh well, it’s only once a year, right?